As many of you saw through my Instagram (@kfogara) and Snapchat (@thouswell), I spent a week in Oaxaca, Mexico in August. It was absolutely amazing to be immersed in another country and culture for a week, learning about a part of Mexico that’s rich in artisan crafts and famous for its cuisine. We stayed in an Airbnb in the center of the city, then traveled to different towns in the region to visit different artists and archeological sites. The city of Oaxaca is a popular destination for Mexicans because it has amazing food and is the center of a lot of cultural activity in Mexico. Not only are there hundreds of ancient Zapotec ruins in the region, there are many traditional crafts that come from Oaxaca, like polished black pottery and rug weaving. 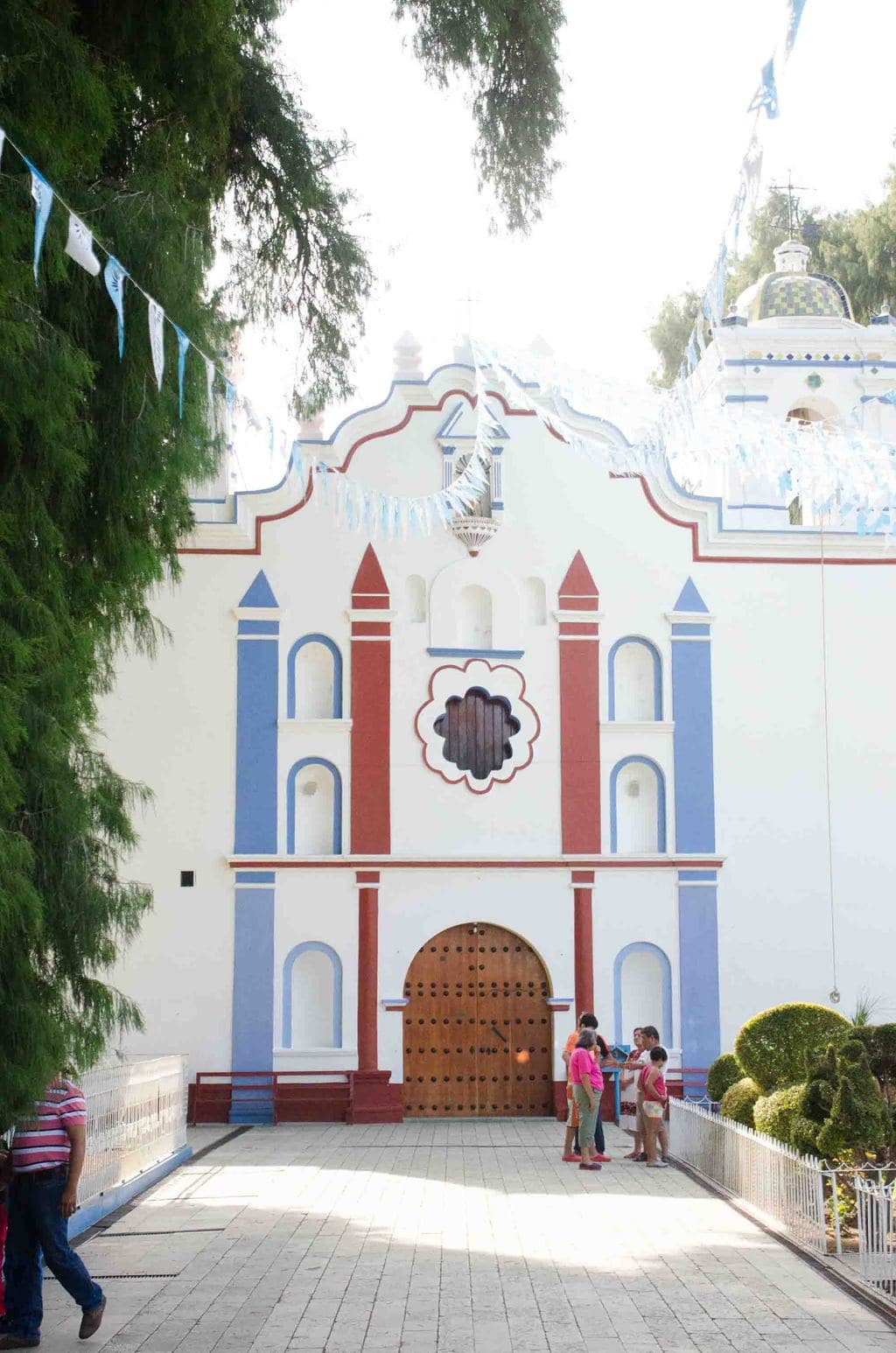 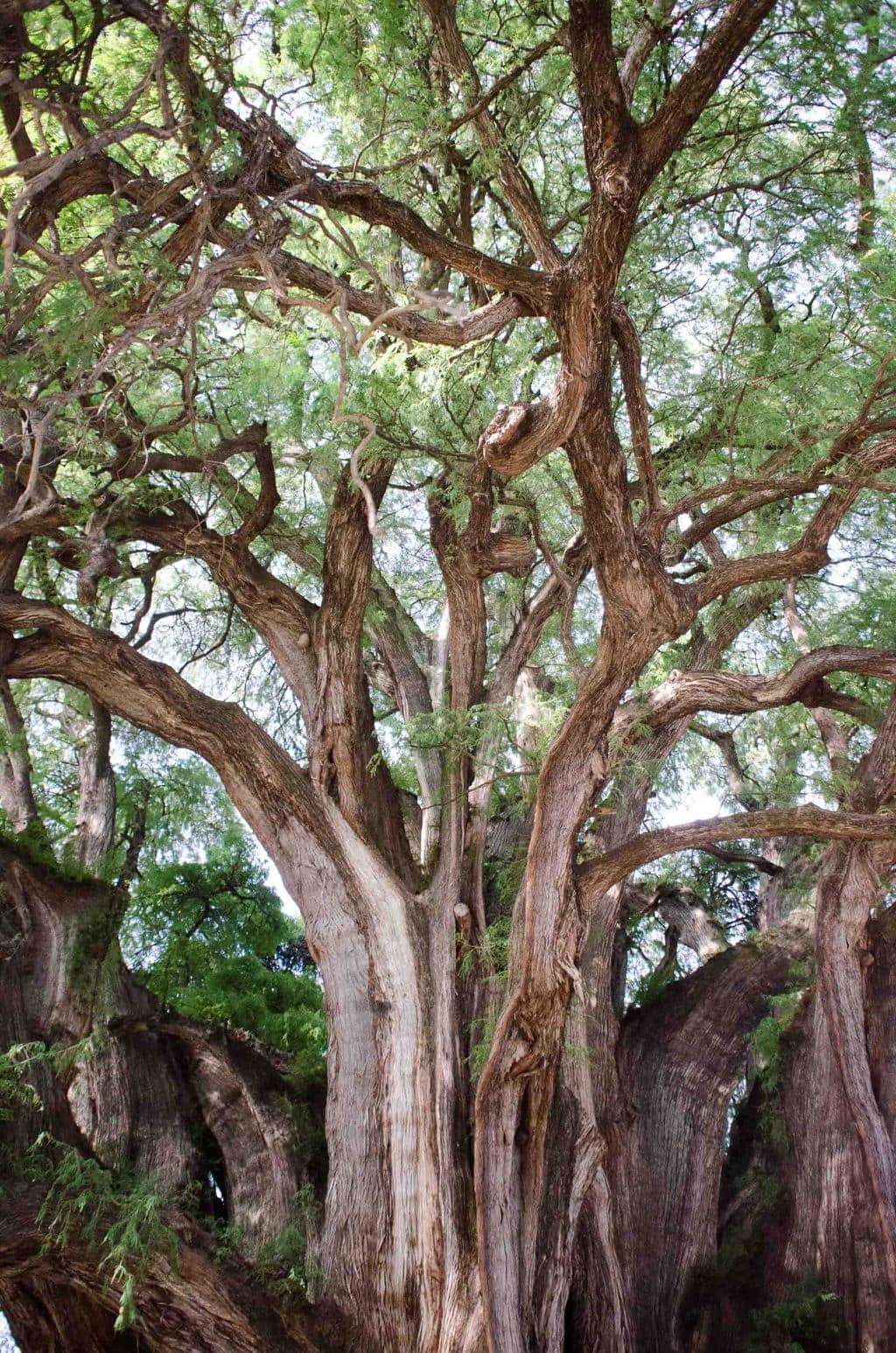 The first day we traveled to the Tule tree, which is the largest tree in the world. It’s a cypress tree, and although it’s not that tall, the width of the trunk is the amazing part. It measures 119 feet around, and is around 2,000 years old. Local legend has it that the tree was planted by priest of the Aztec storm god. 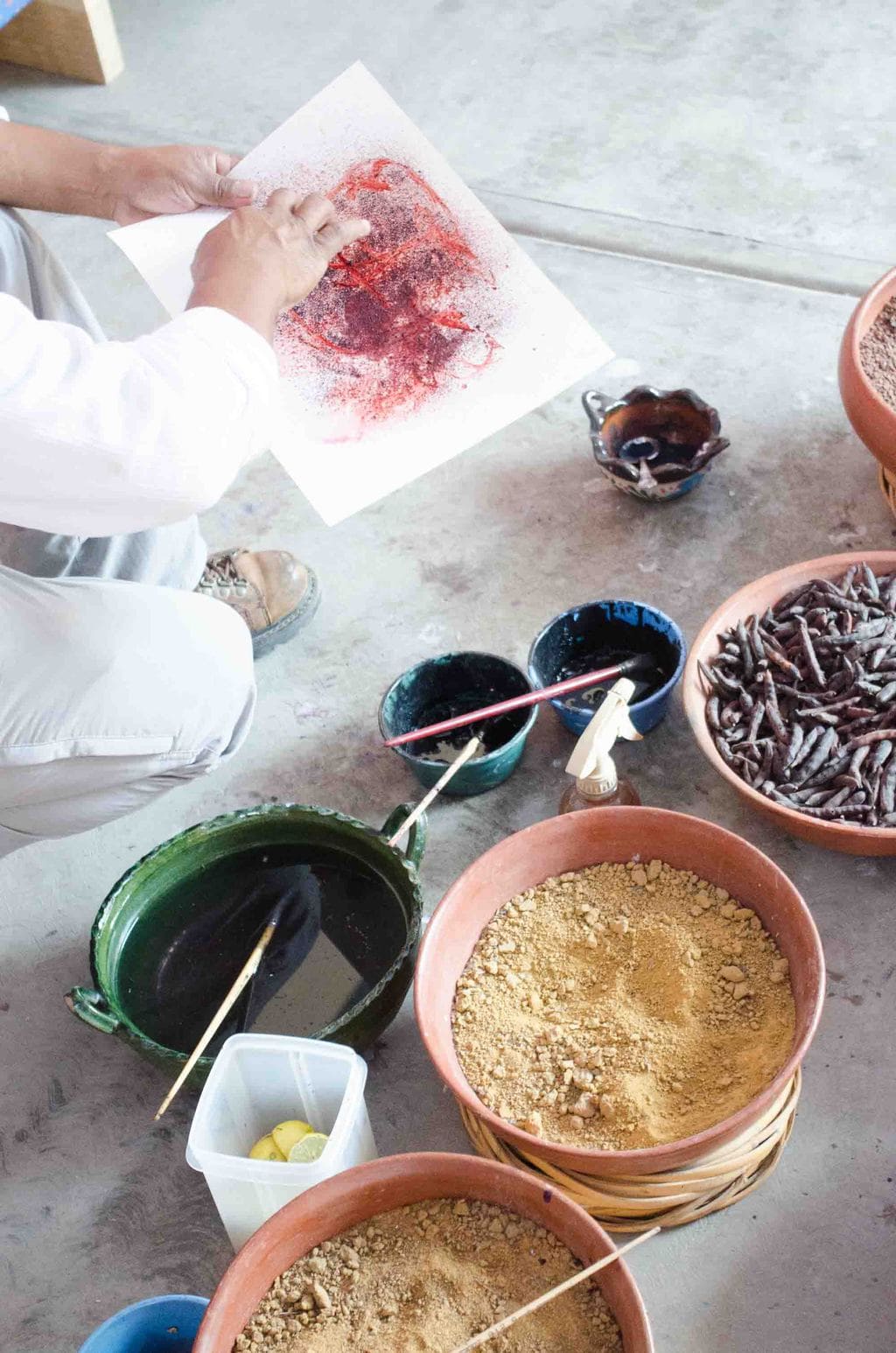 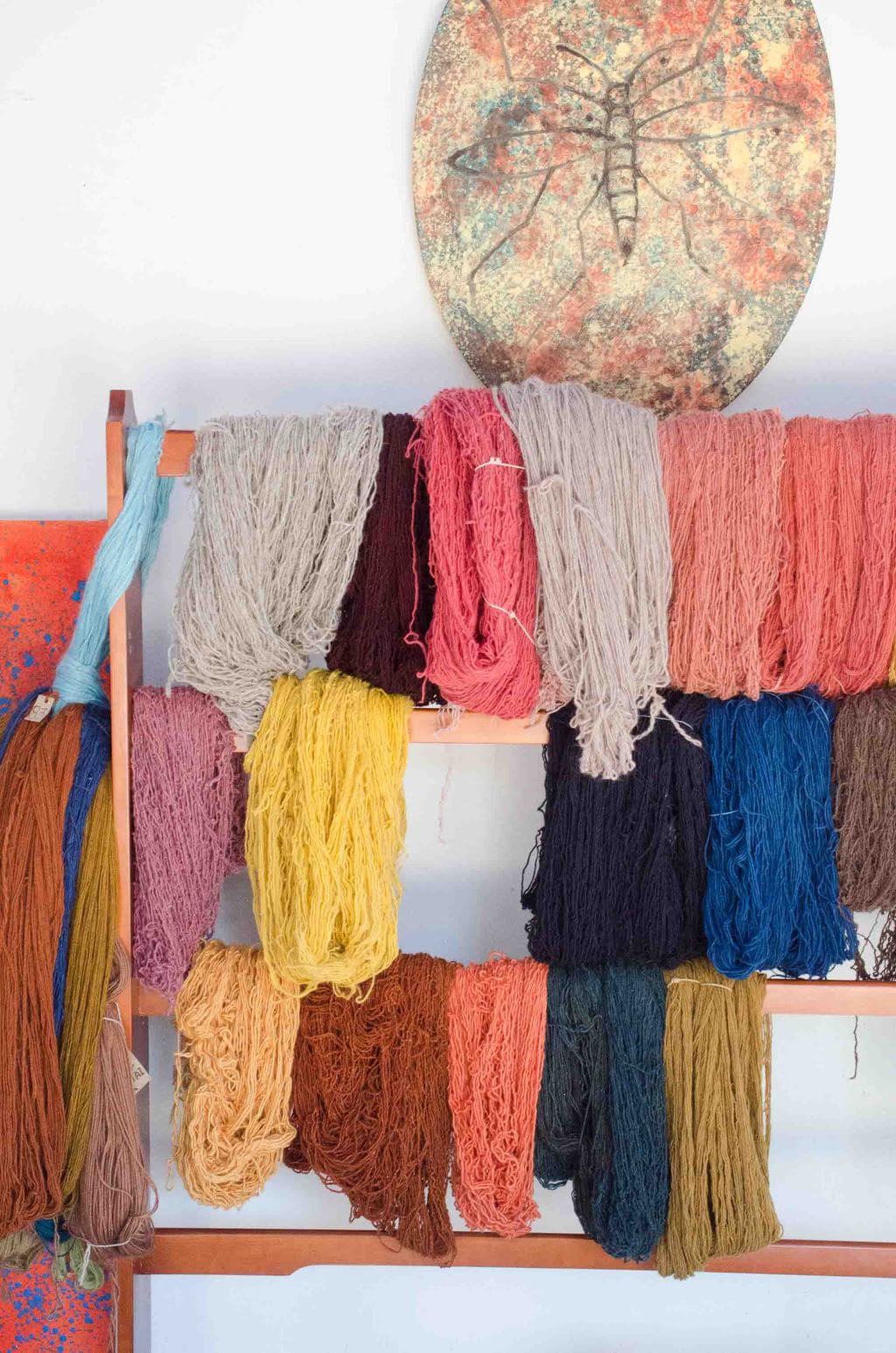 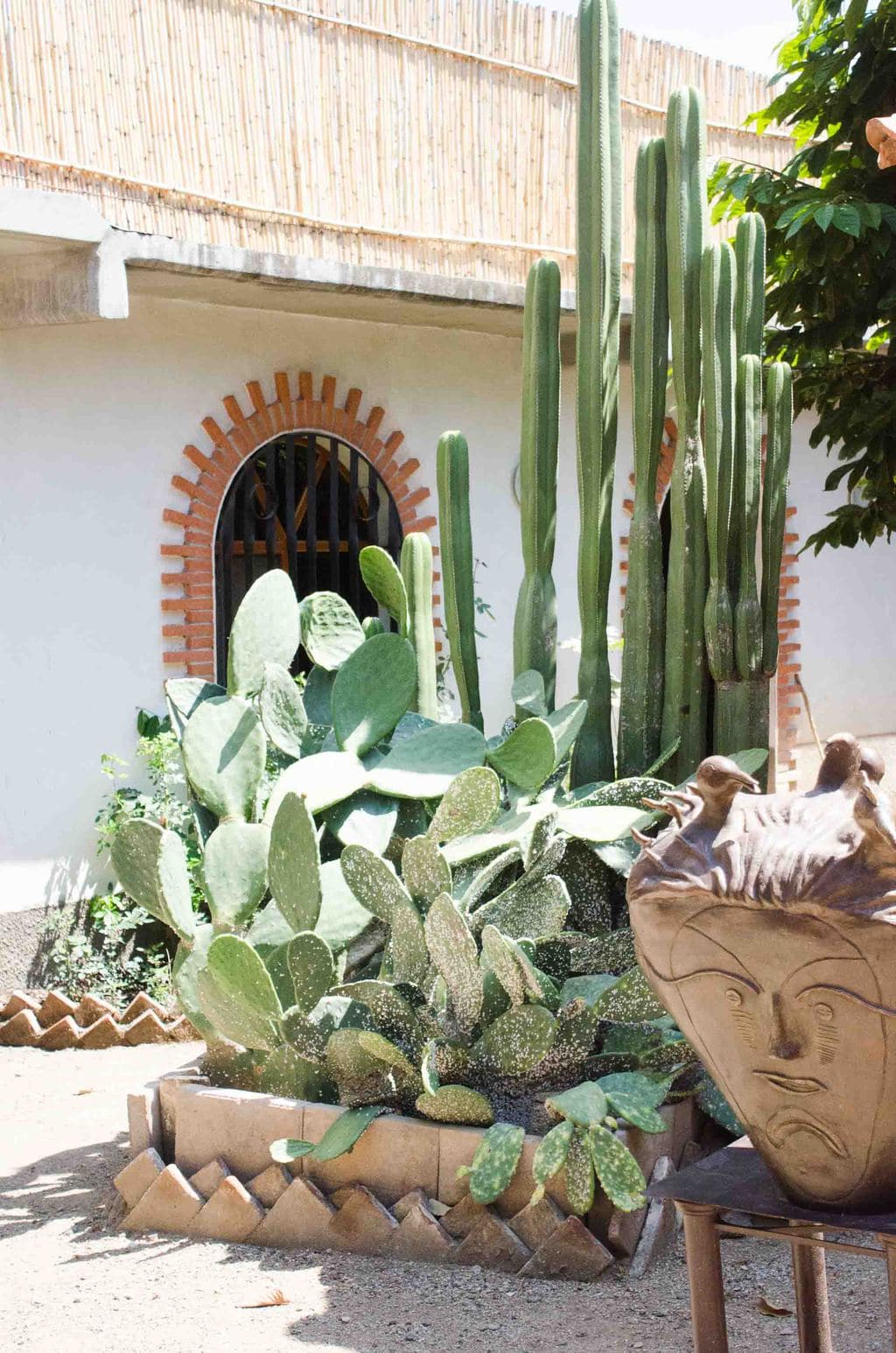 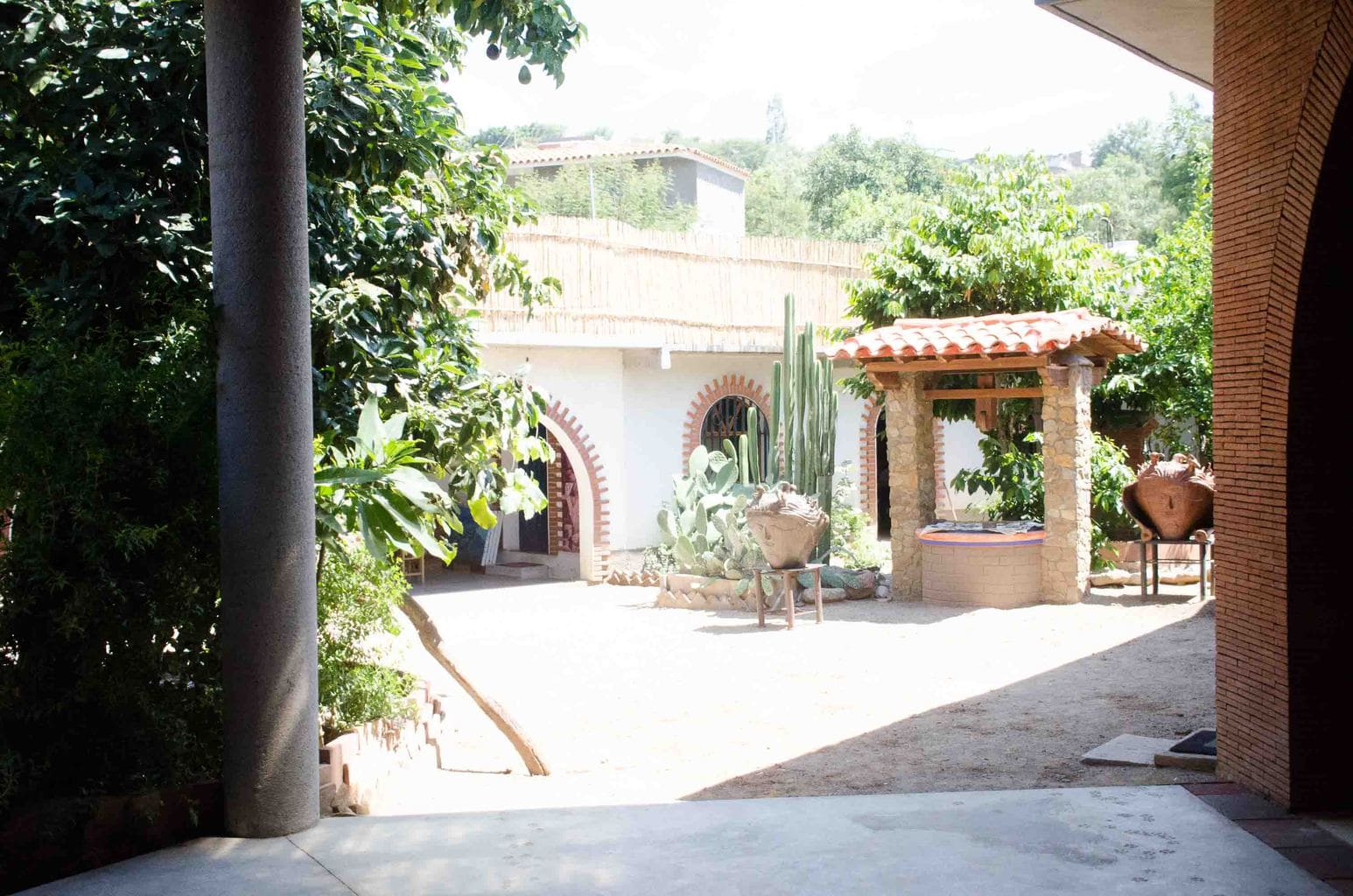 We also visited an amazing painter and weaver, Pantaléon Ruiz, an amazing artist and cultural icon of the region. He grew up in a family of weavers, studied painting in the U.S., then returned to Oaxaca to combine both into a collection of painting, weavings, and rugs. Like many of the homes in the towns and villages of Mexico, his studio and home centered around a courtyard with a small garden, which I fell in love with! 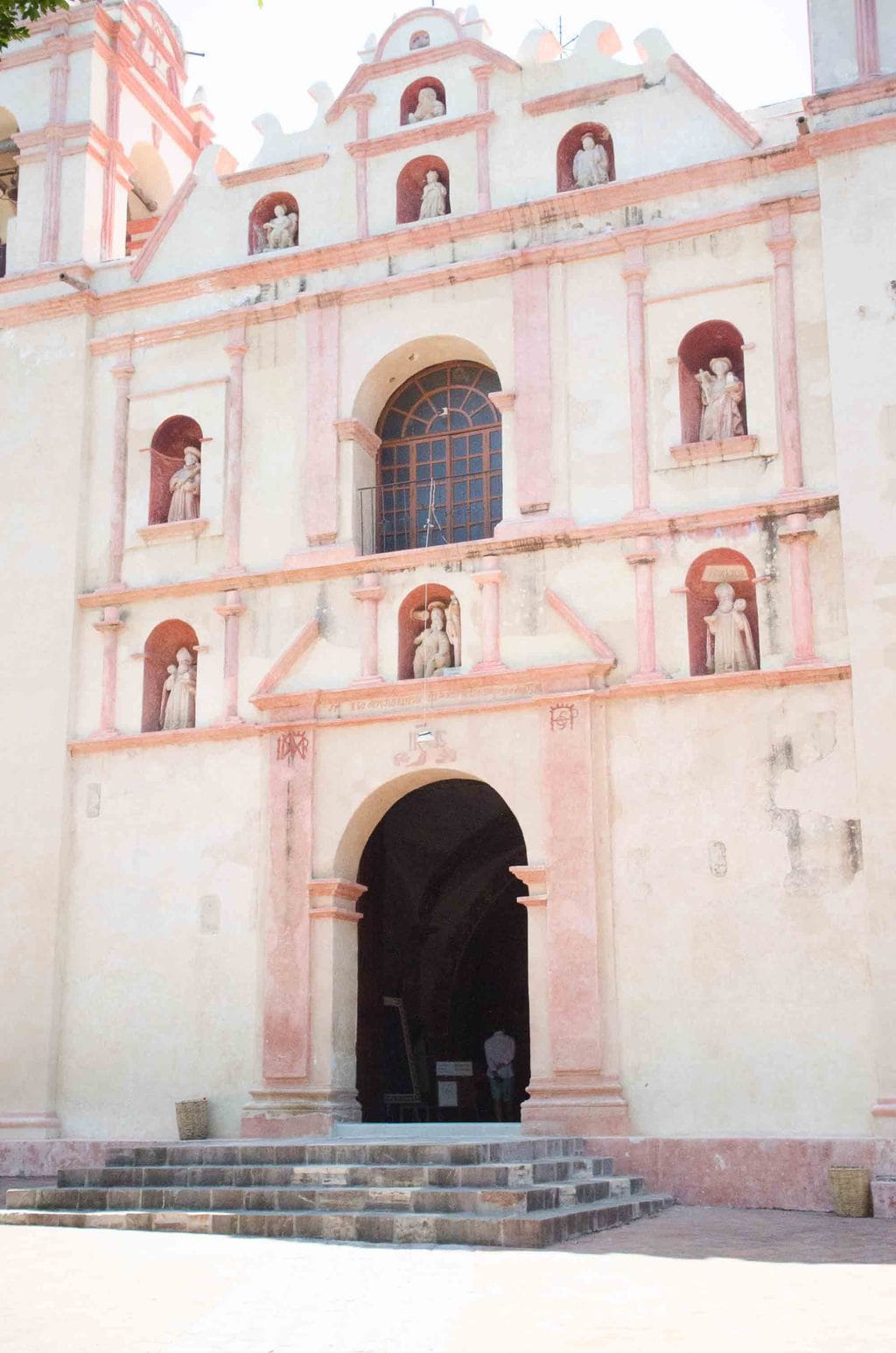 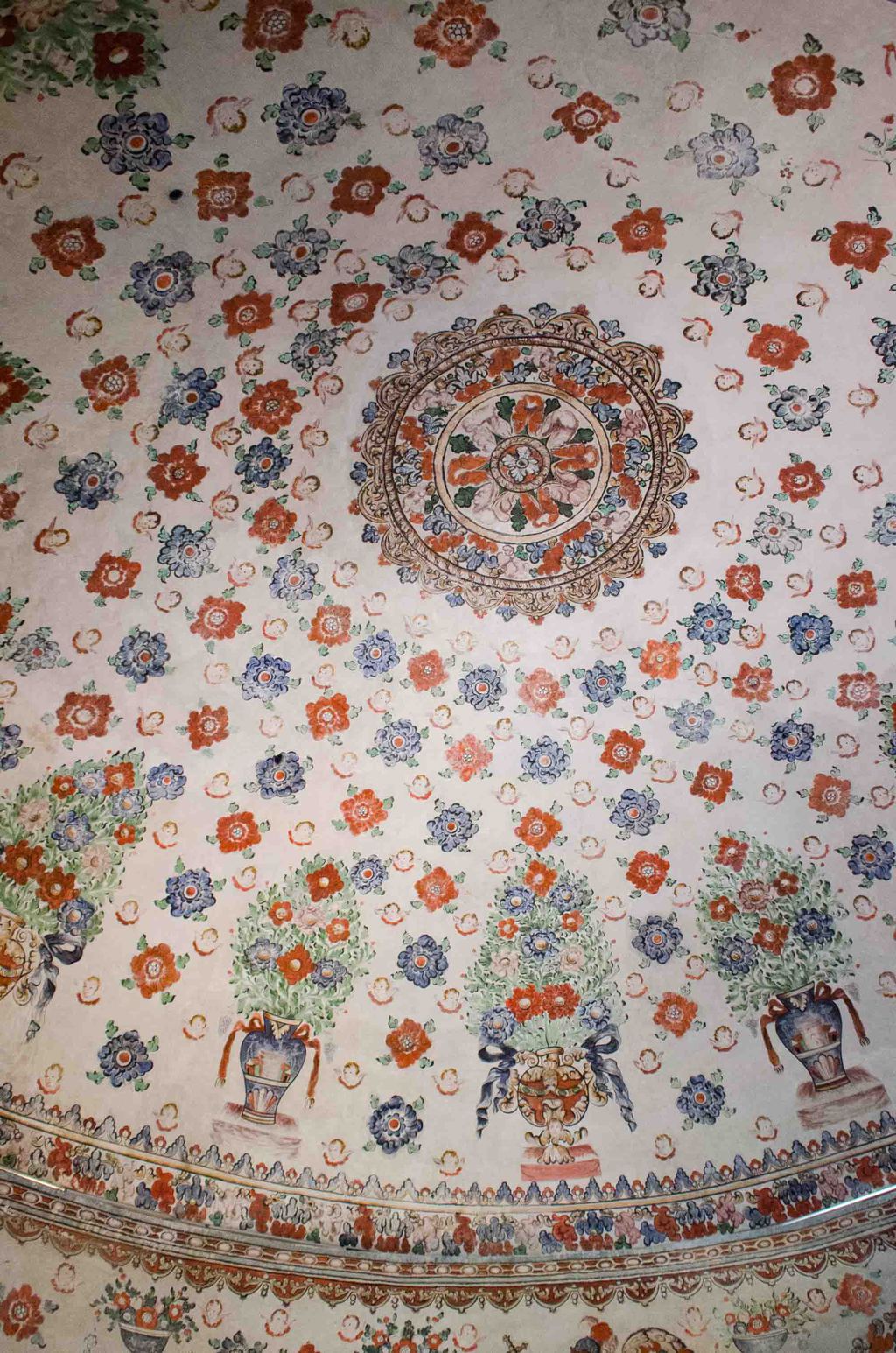 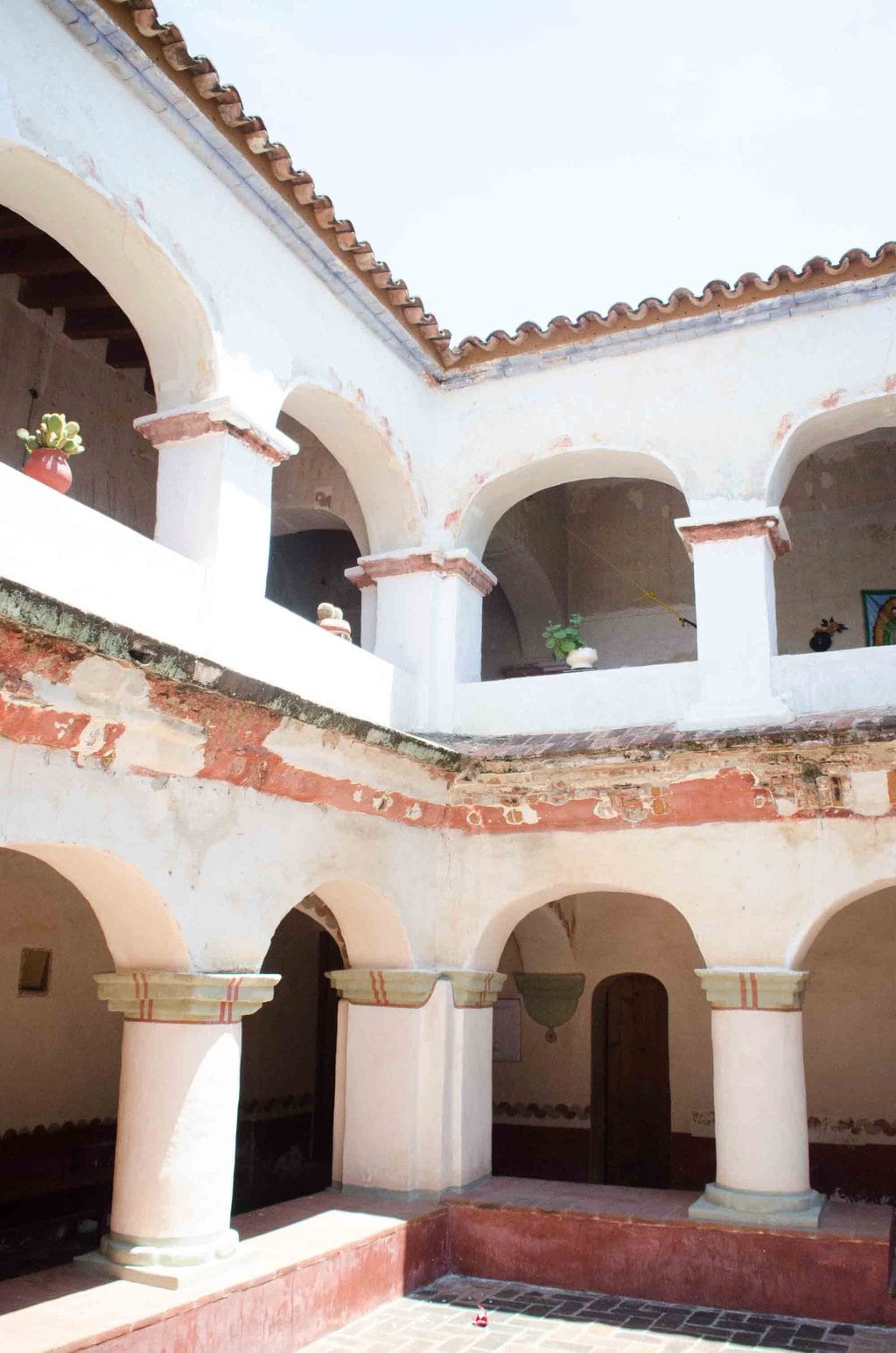 The church and ex-convent of San Jeronimo in Tlacochahuaya is both a religious and artistic landmark. The church was built in the mix-sixteenth century, and the inside was hand-painted by the villagers of Tlacochahuaya. It’s also home to a beautiful historic baroque organ. 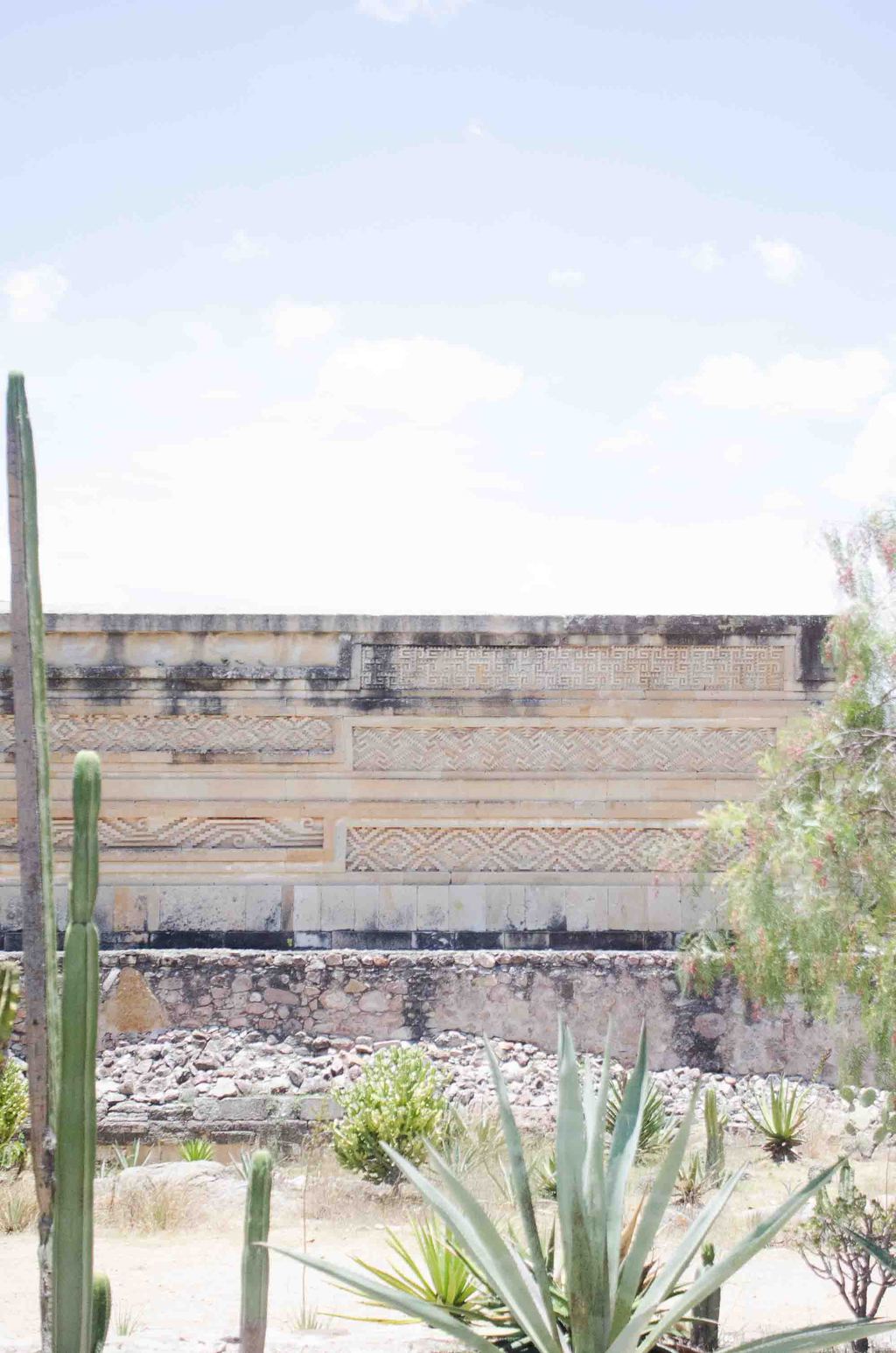 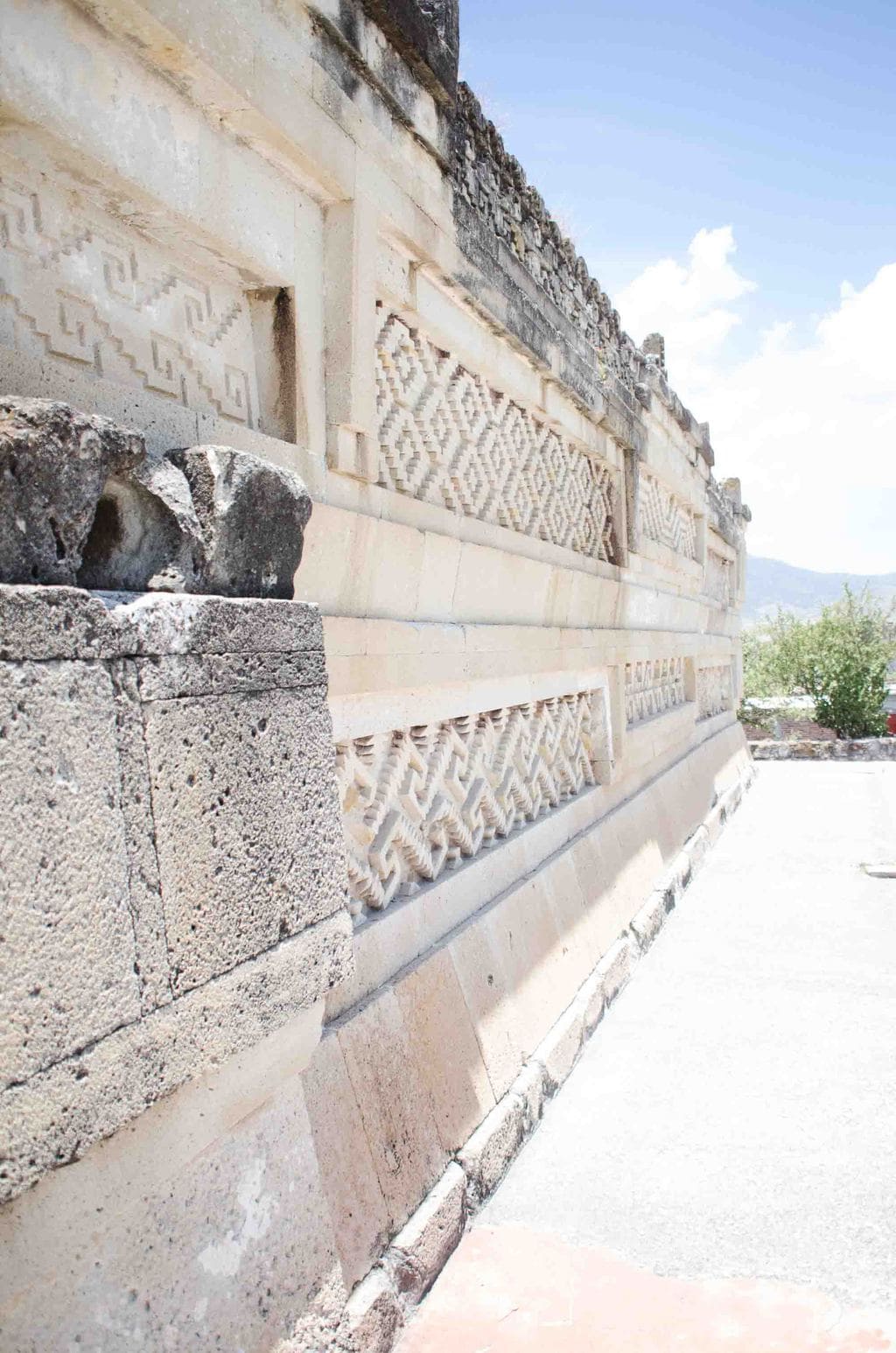 Before the Aztecs conquered the Oaxaca region, the Zapotec nation lived there. Their empire was smaller, but just as interesting and architecturally-advanced as the Aztecs. Because the region is prone to earthquakes, the Zapotec temples are not as tall as the Aztecs, but they developed an incredibly intricate building technique that involved precisely cutting stones that fit together in a pattern without any grout or mortar. In their last era, they built the religious burial site of Mitla. 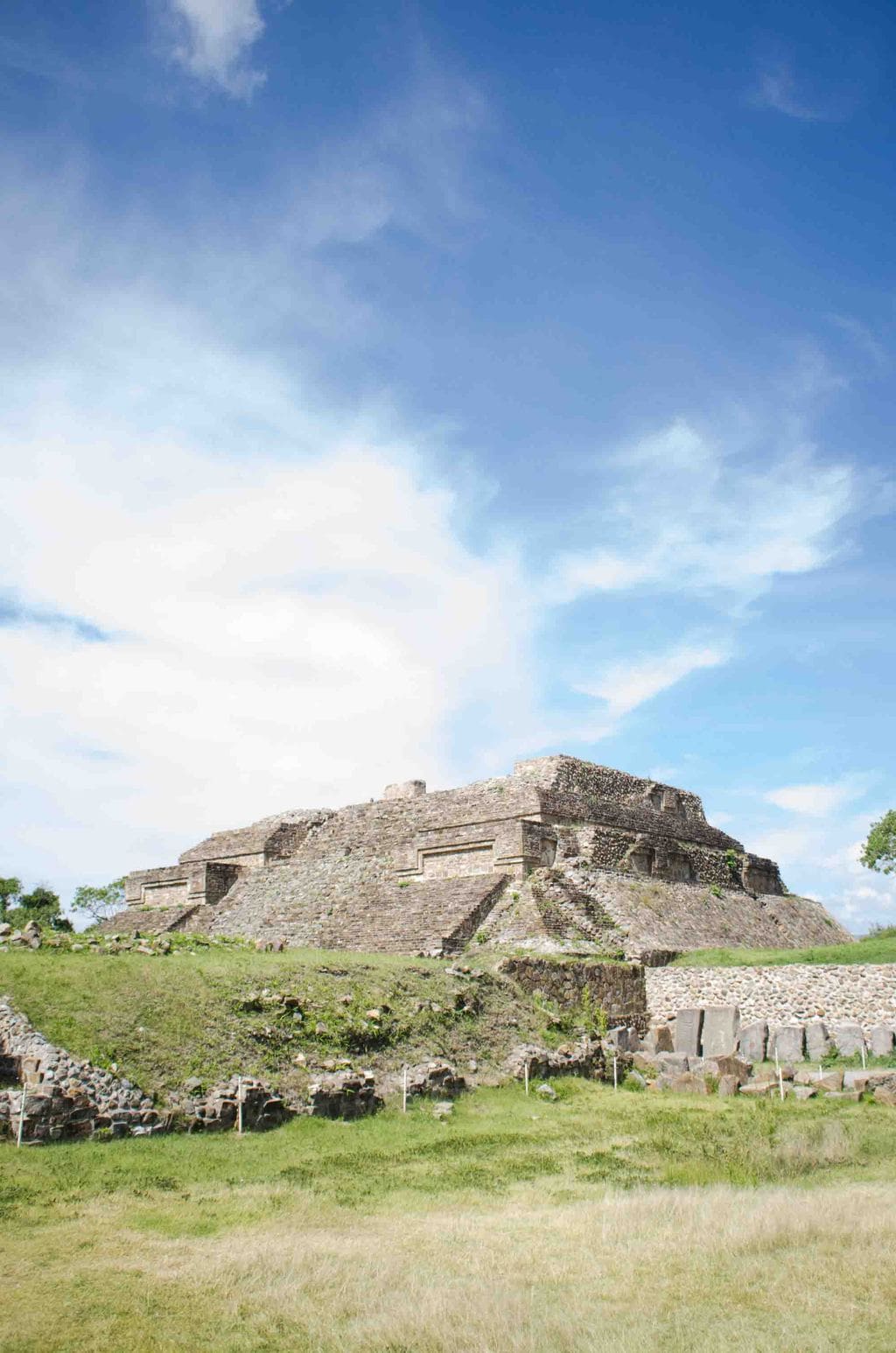 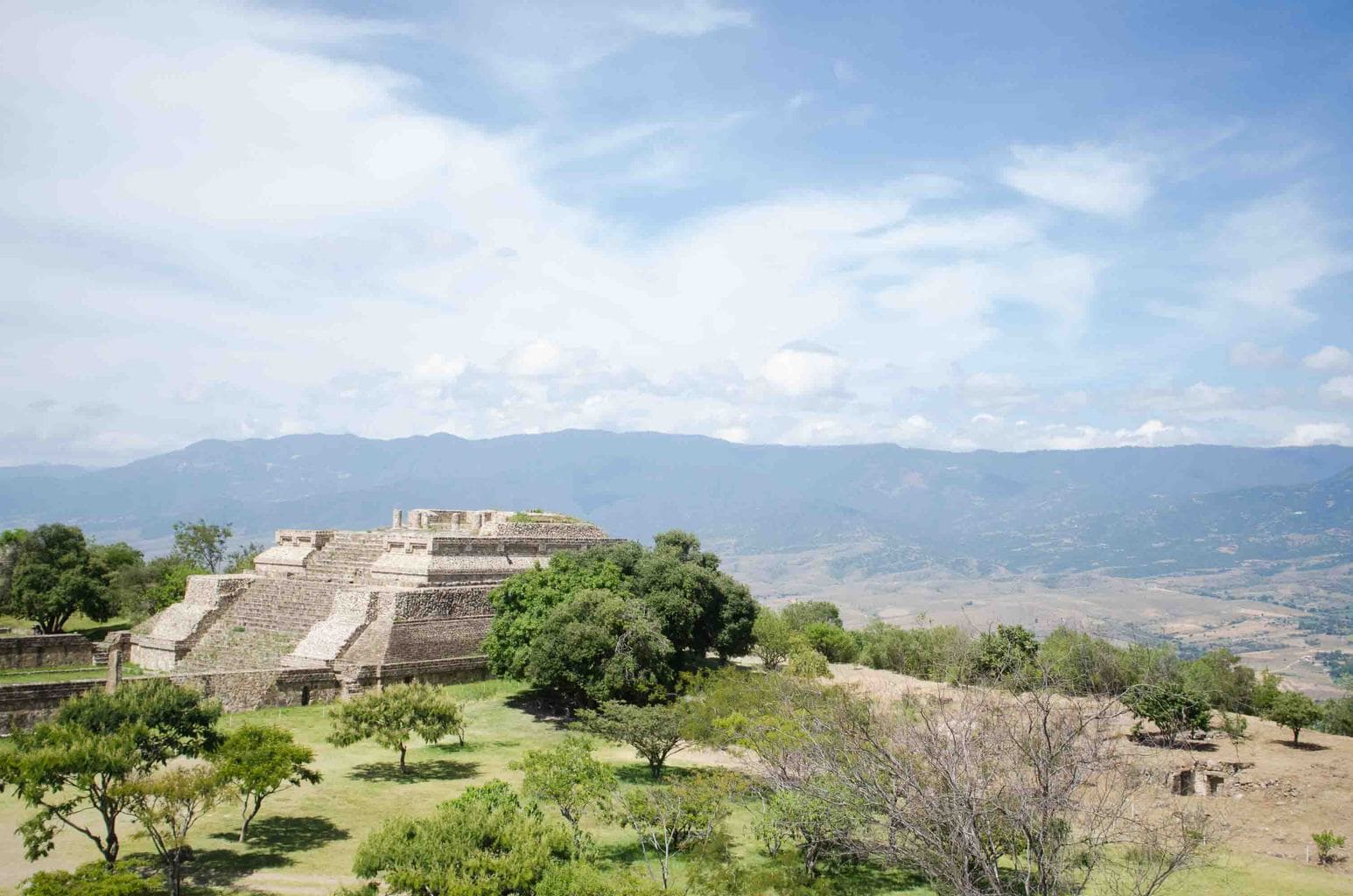 The largest and most famous archeological site of Oaxaca is Monté Alban, a Zapotec capital on the top of a mountain in the valley of Oaxaca. The site is strategically located and was built at the heigh of Zapotec power. There are thousands of temples in the area that have yet to be uncovered, but the the central portion of the city with the most significant temples surrounding a large open market area has been excavated. As you climb up and over and around these great structures, it’s incredible to think that the area used to be full of people and each temple topped with massive columns. It was inspiring to think about how the structure of this ancient civilization could inform the structure and development of modern communities. I loved the wide temples and the way the stairs up and down the temples led you over the hills. 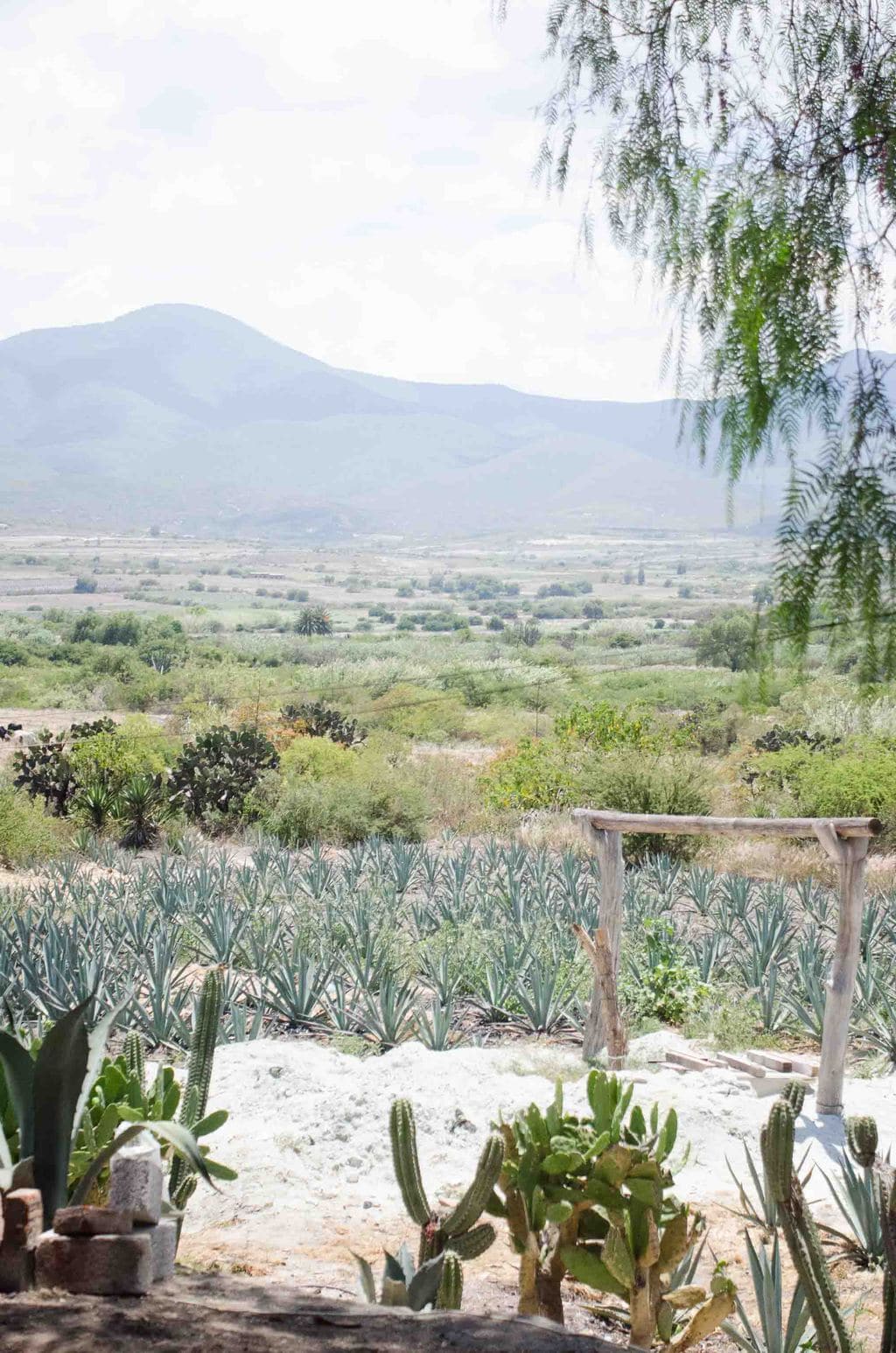 Oaxaca is also famous for its artisanal mezcal drink, which is similar to tequila because it is made from the agave plant, but mezcal is cooked in a copper oven in the ground and has a strong, earthy taste. I tried a bit and decided it wouldn’t be my first choice of beverage, but it is definitely a special drink to the region, and its production was interesting to learn about. 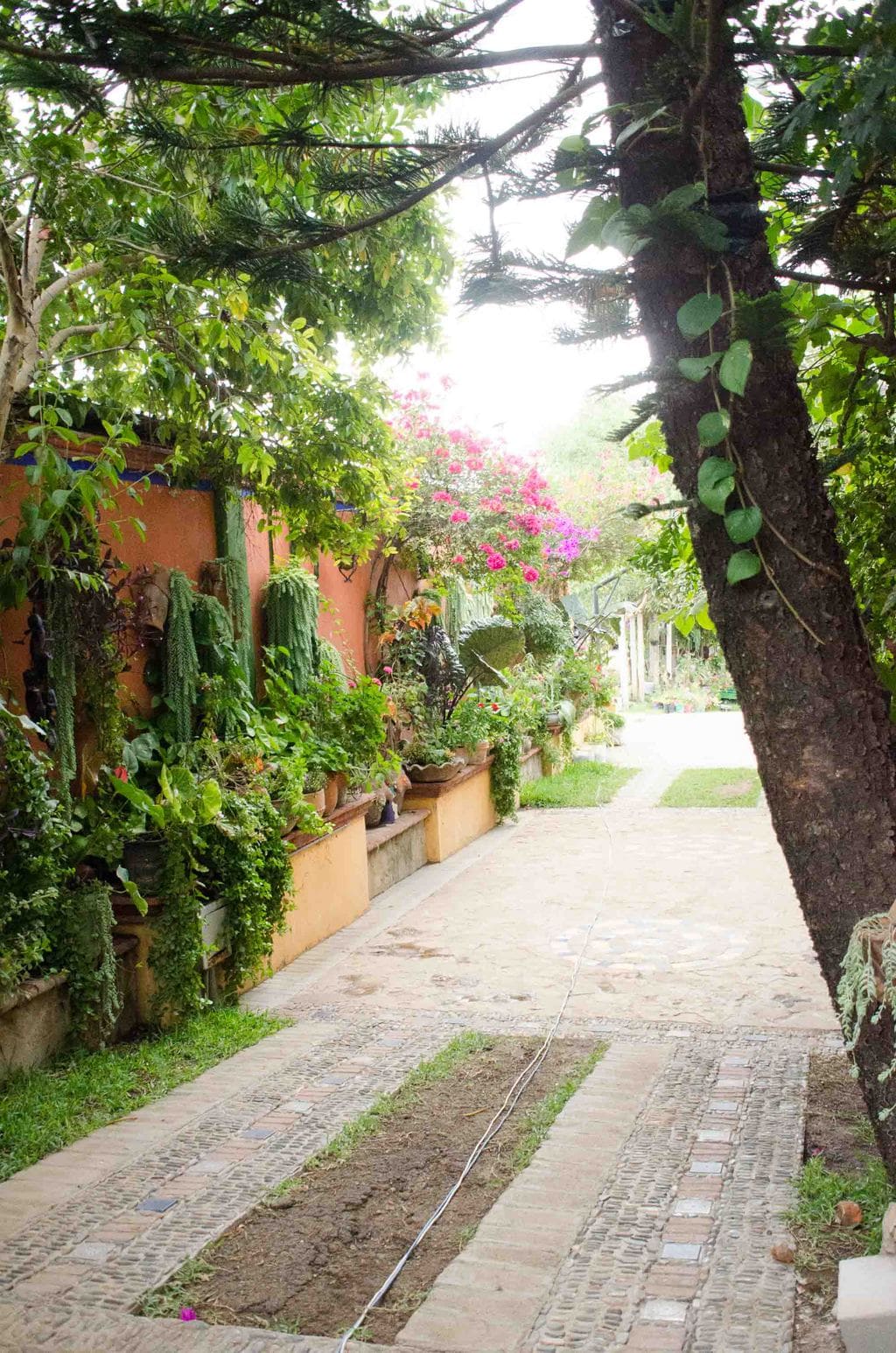 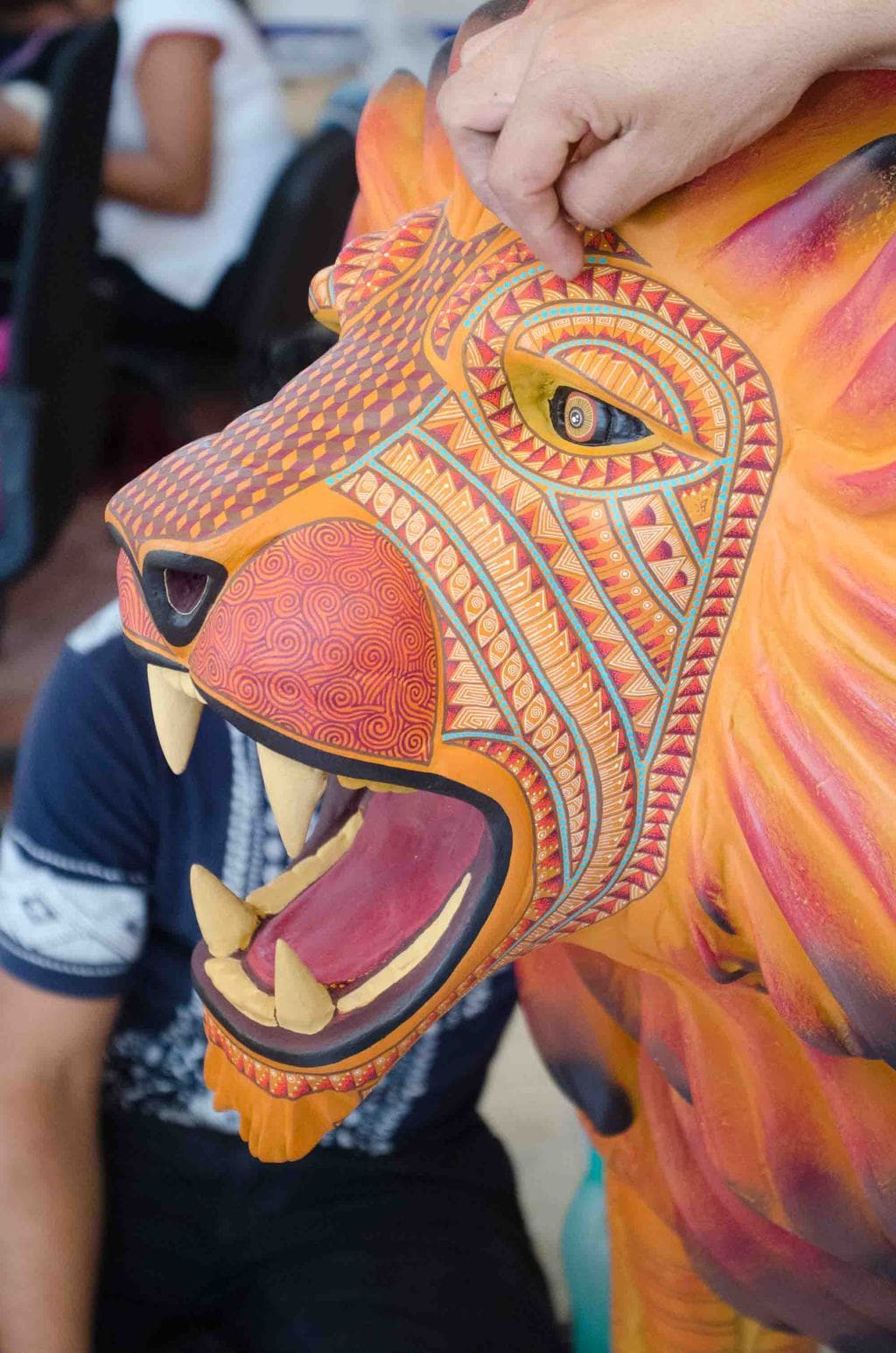 Another artisan craft of Oaxaca are painted animals. If you visit any shop in the city, there will be a couple of these pieces, small or large, because they are local to the region and very popular as souvenirs! We visited a school of painters that creates these animals, and I picked out a little pig figurine in a blue pattern. Each pattern has special symbology, and we got to learn a little about how they created the intricate designs on each piece. 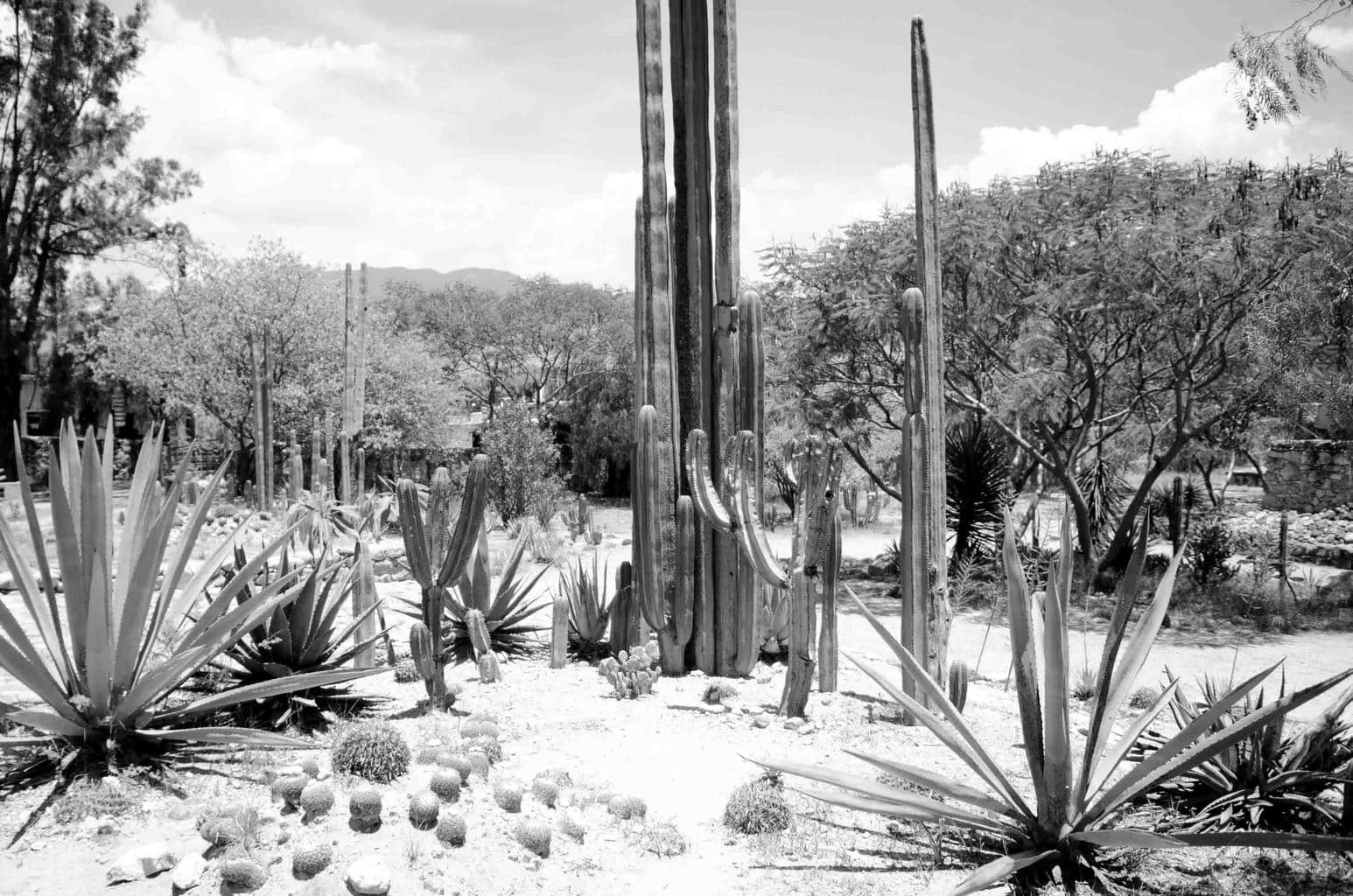 There’s so much more of Oaxaca that is amazing to see and do. I highly recommend visiting these museums in the city: Museo Las Culturas De Oaxaca, Museo Textil de Oaxaca, and the Jardín Etnobotánico de Oaxaca. Also, the food will blow you away. There are so many incredible restaurants in Oaxaca, especially considering the size of the city. Each one was fantastic – from the service, to the menu, to the presentation of the food. If you visit, make sure to visit at least one of these restaurants: Los Danzantes, Casa Oaxaca, Zicanda, Zandunga, and La Pitiona. I had more pictures of the city itself, but unfortunately I accidentally deleted two days of photographs. But one of my favorite parts of the city was the mix of indigenous, colonial, and modern architecture. Many of the buildings and courtyards in the city had been beautifully and thoughtfully repurposed. There’s nothing like another culture to give you an education – it was such an inspiring trip! 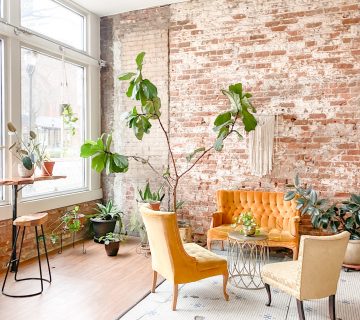 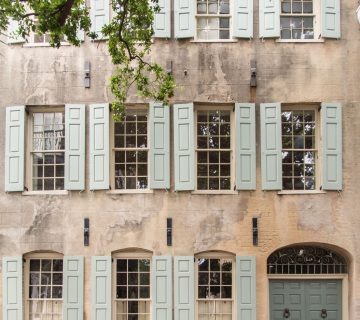 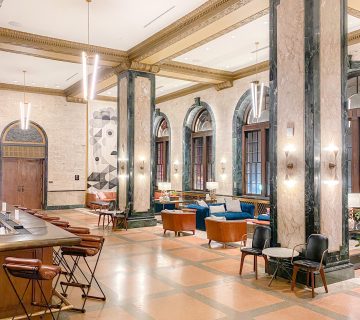